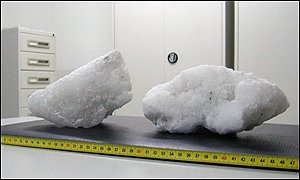 Chunks of ice as big as basketballs have been plummeting out of Spain's skies in recent days, baffling scientists.

One man in the south of the country narrowly escaped serious injury last week when a 4kg ice ball smashed into his car.

It was at first thought human excrement ejected from aircraft was to blame, then perhaps debris from comets. 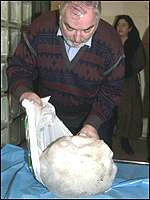 "The most surprised person of all by this phenomenon is me," said geologist Jesus Martinez Frias, who is heading a team of experts investigating the problem.

They have travelled all over Spain collecting and analysing the blocks of ice, over a dozen of which have so far bombarded the country in the last 10 days.

Professor Martinez told the daily El Pais that the chunks appeared to be nearly 100% frozen water but chemical testing should reveal their origin by Friday.

He said the chunks lacked the colouring of jet waste, and were too scattered and infrequent to be pieces of comet tails.

They should also have been large enough to register on radar screens.

Meteorologists have ruled out the weather as a possible explanation.